Samsung is a pioneer in the mobile virtual reality market. Its consumer version of Gear VR is available for sale now just for $99.

Increased shipment of smartphones, strong brand recognition and the rise of the VR market are the main catalysts for company’s growth.

In November, Samsung (OTC:SSNLF) launched a new marketing campaign to promote its virtual reality device Samsung Gear VR. The campaign is a part of Samsung’s global initiative called It’s Not a Phone, It’s a Galaxy.

The ad shows a wide variety of people that use Samsung Gear VR to watch a different kind of content that is available for the device. And the slogan is clear: Virtual reality just got real. And that’s true. Last year, there were a number of VR devices announced to be released anytime soon and “hungry” developers already started to explore this relatively new technology for their own use. Samsung’s Gear VR is one of the pioneers in this industry, with the consumer version available for sale now just for $99. This puts the company at the top of the smartphone VR spectrum in terms of quality and price. And considering the fact that Samsung has enormous resources and a properly-built ecosystem, it seems that its VR device will be there for a long time.

If we look at the current virtual reality market, we would see that there are two different types of VR devices. The first ones are built for PC and consoles and offer a greater experience and a better graphics to the end user. However, they cost more and customers need a more powerful platform to use them. The examples are Facebook’s (NASDAQ:FB) Oculus Rift and Sony’s (NYSE:SNE) PlayStation VR. The second category of VR headsets is created for smartphones. They don’t offer the same quality of graphics and physics as VR devices from the first category, but they’re cheaper and more accessible for buyers.

Samsung Gear VR fits into the second category and is compatible with all of the Galaxy smartphones. All you need to do is slip your phone inside the headset and you experience the world of virtual reality. The first consumer versions of the device were released last November and became one of the best-selling products on the market. Engadget called it a no-brainer and CNET said that it offers the best VR mobile experience so far.

As I said before, Samsung Gear VR is designed for mobile platforms. And it’s obvious that the company will benefit from the rising smartphone market. According to Statista, global smartphone shipments will rise in the next couple of years: 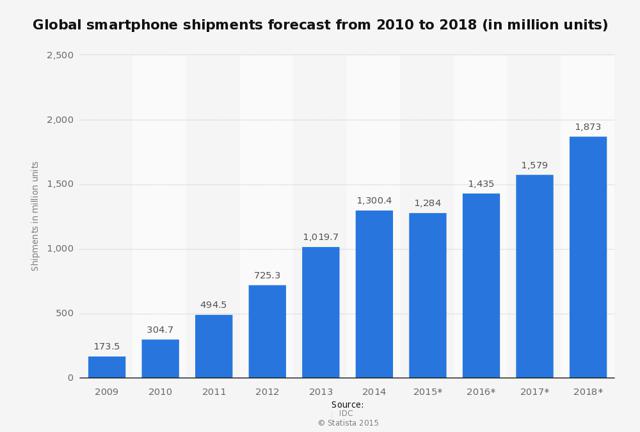 And the fact that Gear VR is comparable only with Samsung devices is not a big deal because the company has the biggest share of the smartphone market in the world and it seems that it will only expand further and increase the number of its users. 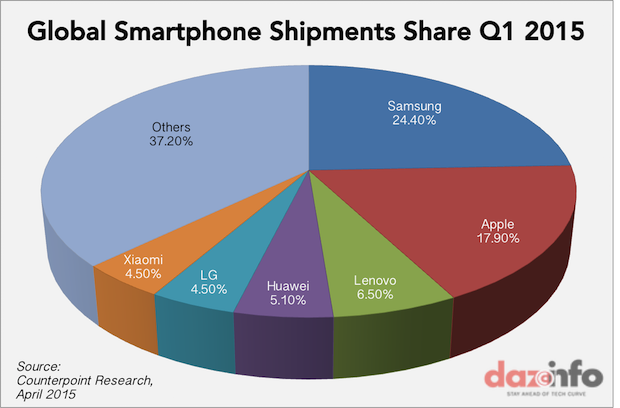 As the virtual reality industry gains traction, more and more competitors will join the field. That’s why for Samsung it’s important to establish a presence in the industry as fast as possible. According to the data from research company TrendForce, the global value of the virtual reality market will grow consistently each year, from less than $10 billion in 2016 to around $70 billion in 2020: 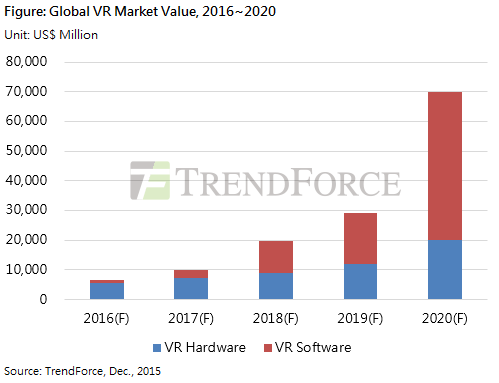 And as we can see from the picture above, hardware will play a crucial role at the first stages of this fast-growing market. And the market is not that populated at the moment. Samsung’s main competitors in this field are private companies like Freefly, Noon, Zeiss and others. However, most of them are selling only online and don’t have the luxury to be available for sale at the major retail franchises. And Samsung’s ecosystem offers far more greater experience than all of those companies. At the same time, the competitors’ price is in the range of $70 to $120 and the quality of the product can be questioned.

The last factor that plays an important role in Gear VR success is Samsung’s brand recognition. Long ago, the company established itself as a major player in the electronics market and people love to buy its products, thanks to the great quality and relatively low price.

The virtual reality industry is just gaining traction. A lot of companies are already developing their own devices and hope to take some chunk of this fast-growing market. And while big tech giants like Facebook, Sony and HTC are making their product for the powerful platforms like the PC and next-gen consoles, Samsung is taking the most out of mobile customers.

At this point in time, it’s important for the company to establish itself as a major manufacturer of hardware virtual reality devices. And that’s what Samsung is doing great at the moment. All of its headsets are already sold out and pre-orders are way off the cliff. With the strong presence in the industry, the company could afford to invite the best software developers to create content for the Gear VR. I believe that Samsung had a great launch for its VR device last November, and with the resources that they have and all of the catalysts that I described in this article, the company is poised for growth.

The above article originally appeared on Seeking Alpha, written by Dana Blankenhorn.

Much has been rumored about new consoles from Nintendo and Sony. Both Japanese companies have been secretive about their plans for their new game systems. In Nintendo’s case it’s the NX, a console that’s seen its fair share of speculation with everything from resolution and frame rate to well-orchestrated fake controllers. As for Sony, since GDC 2016 we’ve seen more than a few murmurs of a PS4K – allegedly a souped-up version of the PS4 for gaming at higher resolutions and for enjoying enhanced VR.

And while both companies have been quiet in the face of never-ending speculation, Nintendo being silent as it always is, and Sony’s executives preferring to tweet that they’re playing Dark Souls 3 in VR instead of tackling fan questions head on, the biggest indicator lies in their common partner, AMD.

According to the graphic giant’s latest financials, you can expect new consoles “in the second half of 2016.”

Now, while AMD hasn’t explicitly said who is launching what, its complete statement is as follows, as highlighted on NeoGAF:

With Microsoft’s Phil Spencer quashing all rumors of an incremental Xbox One, that effectively rules it out. Considering that AMD’s chips have been powering all three consoles makers, it leaves both Nintendo and Sony with products to showcase.

This article was originally posted on Gadgets 360

Citing talks with “developers who have spoken with Sony,” gaming site Kotaku reports Sony (NYSE:SNE) plans to launch a revamped PS4 able to handle 4K gaming and “enhance the games” supported by the PlayStation VR headset(shipping in October).

The console, dubbed the “PS4.5” by developers, is said to feature an improved GPU to enable 4K support, as well as more processing power. No word on its launch date or pricing, or whether Sony will continue selling the current the current PS4 after an improved model launches.

The report may have given a lift to PS4 CPU/GPU supplier AMD, which closed up 4.6% on above-average volume. A more powerful processor would almost certainly bring with it a higher price tag. AMD rallied yesterday after Bloomberg reported Intel is in talks to license AMD’s graphics patents.

NPD data is out and Sony (NYSE:SNE) came out as the clear winner in the console race. According to NPD data for the US, Sony’s PS4 saw volume +49% versus Microsoft’s (NASDAQ:MSFT) Xbox, which saw volume only up +6%, essentially outselling the box by roughly 15%. Although both companies performed above market growth of 4%, it is clear that Sony is the key beneficiary of the trend thanks to PS4’s technology superiority over the Xbox, optionality into web TV services such as Vue and the opportunity to add PlayStation VR once the product is launched to the mainstream. Solid PS4 sales are also accretive to Sony’s software sales and I expect this to drive the profit expansion for the game segment in the near-term. Remain bullish on SNE.

Looking at the NPD data from the last two months of 2015, Sony outsold the Xbox by 17% combined. This is much higher than the +12% outselling of the Xbox since the launch of the PS4. Relative to the prior year, PS4 volume was +65%, exceeding the meager +6% growth seen in the Xbox. This is particularly important given that strong sales in the PS4 certainly offset the declining sales of the PS3. Unfortunately for MSFT, slow Xbox One sales were not enough to offset the decline in Xbox360.

The strong PS4 sales are very accretive to the PlayStation software growth and the penetration of the PS Vue web TV service. On the software side, I note that Call of Duty: Black Ops III from Activision (NASDAQ:ATVI) and StarWars Battle Front from Electronic Arts (NASDAQ:EA) both were hit titles that benefited from the rising PS4 sales. In addition, digital sales of games over the PlayStation network may have also benefited from the PS4 penetration.

Going forward, I see several factors that are supportive of SNE’s near-term growth outlook. First, upcoming titles from ATVI, EA, Take-Two Interactive (NASDAQ:TTWO) and Capcom (OTCPK:CCOEY) will continue to drive PS4 sales, thereby extending the lead of PS4 over Xbox. Second, the cord-cutting trend in the US favors PS Vue, which is gradually replacing the typical cable boxes that we frequently use for TV consumption. Finally, the expected rollout of VR for PlayStation could result in an acceleration in PS4 sales assuming that the PS VR is priced for the mass market.

On the financial side, rising digital games sales are a positive for SNE’s profits given their high-margin profile. I believe there is a good chance SNE could generate higher profit per game and ultimately beat the game segment OP guidance.

SNE remains one of my favorite Japanese tech stocks and I reiterate my bullish view.

The above article originally appeared on Seeking Alpha, written by WestEnd511.